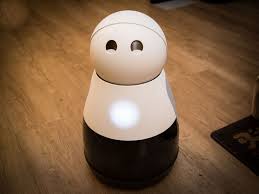 the Kuri robot was created to be a capable babysitter and security device. At just 20 inches tall, this little robot is capable of face recognition, video and image capture through a 1080p camera hidden in its eyes. It can act both as a clever playmate to your kids or pets, and a roaming security camera.

The main advantage of Kuri over any other robot helper is its personality: Kuri uses the latest advances in artificial intelligence to not only recognize voices, faces and places, but also to learn from their context and respond accordingly.

In practice this means that Kuri will be capable of learning from each family member´s routine, sending notes directly to your cell phone whenever it notices anything out of place, thanks to its Wi-Fi and Bluetooth capabilities.

Aesthetically created to please the youngsters

The first time we had a look at Kuri was at this year´s Consumer Electronic Show, in Las Vegas, and it definitely had a Pixar-esque air. The robot is all white, except for its base. It has round shapes, expressive eyes and color-changing LEDs built into its chest. Its look perfectly matches the chirps, beeps and nods that this little robot uses to communicate.

Its personality was also designed to connect with the family and their routine, getting smarter over time with regular use and software updates. According to Mayfield´s COO Sarah Osentoski, the most important aspect of Kuri is that it has a face instead of a screen. The robot is capable of using facial expressions and LEDs to autonomously show its mood. It will even look at you if you gently tap its head.

According to the people at Mayfield Robotics, Kuri is smart enough to set reminders, and then use its built-in Wi-Fi connection to let you know about them. It can also patrol the house while you are out, and, supposedly, will be capable of returning by itself to a charging station whenever it runs low on battery. The main feature, however, is its ability to keep the children busy. Kuri doesn´t talk, but it can play music, podcasts and even stories.

You then will be more than able to use the camera´s streaming functionality to check what is happening, and even speak through its speaker system.

It will do more than just walking around, though. Their creators wants Kuri to join the Internet of Things trend, being able to flawlessly work with IFTTT (If This Then That, the world´s largest online rule-maker) to control any connected devices on your smarthome network using chained actions called Applets.

Sadfully, by the time Kuri was show, the robot was hardly capable of autonomy. It was able, however, to recognize voice commands and faces.

Kuri is set to launch in December 2017, and while it still has a long way to go in its quest to become a reliable babysitter, its evolution is a pleasant one. Being able to see your kids while you are away, set reminders and control most home devices through a single, adorable command center is a plus too big to miss out.